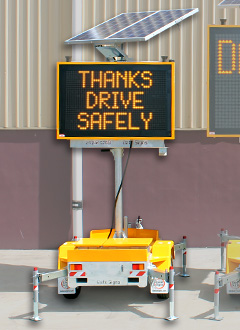 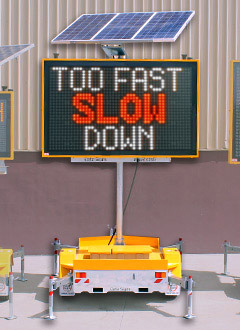 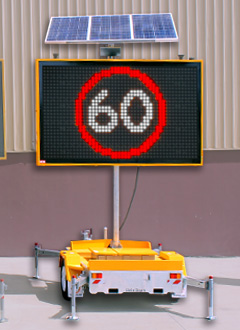 The Radar Signs are also called Speed Advisory Trailer Signs or VMS Radar Signs. These are trailer mounted, self-powered (solar) Variable Message Signs equipped with a Radar speed detector which can then display the detected speed readout and log these detected speeds which can then be emailed for later analysis. These portable signs are fully programmable, feature packed full graphic displays. They can be used for traffic management on road projects, mining sites, in school zones, car parks, or to notify of changes in speed zones, and other applications. 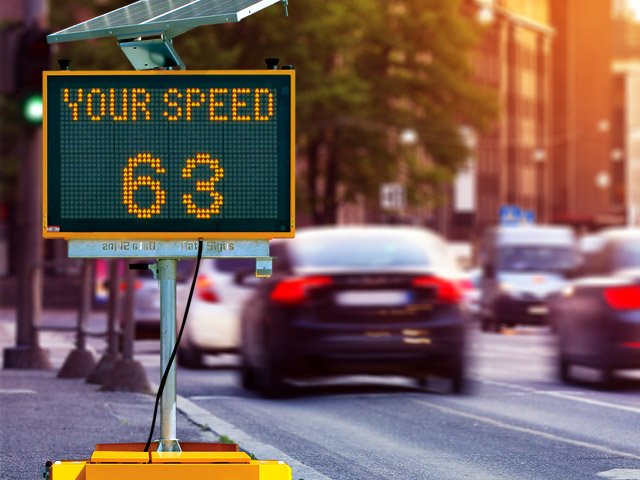 Performance: Detection Range is typically 90+ m (300+ feet) for compact vehicles on open and level road with radar mounted at least 1.5 m (5 feet) high and pointed straight into oncoming traffic. May vary with installation and road conditions. Detection range specified is typical for speeds between 20kph and 88kph (12 to 55 mph). It tapers off below and above this speed range.

No Ongoing Calibration Required: During the manufacturing process, the speed measurement accuracy of each and every radar by an automated test system by using a digital Doppler target simulator.

Communicate with your VMS Radar Sign Remotely using our web based platform DS-Live™ or using a VMS COMPUTER, when fitted to Sign. 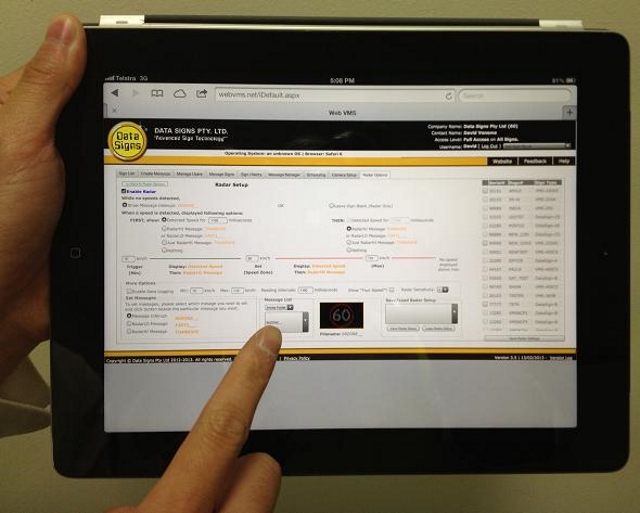 The VMS Radar Sign also has easy-to-setup radar scheduling features so it can be readily used in school zones, construction sites and other environments where the speed limit needs to change at different times during the day.

The video above shows the typical radar usage scenario; show a message until a vehicle is detected then show detected speed and either a slow down or thankyou message. The radar functionality using the web-based DS-Live™; application is fully-featured allowing for many different speed advisory scenarios. For example, display the detected speed and then a smiley face or message if the driver is going below the set speed limit. Or, display a TOO FAST message to drivers travelling above the speed limit. However, you can opt to not display the detected speed on the Sign if the vehicle is travelling too fast. And much more...